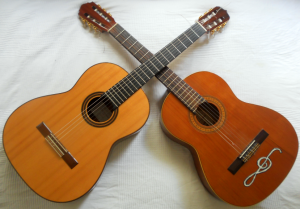 this is my choice of guitars

Before you start playing the guitar, it is important to choose the right one. In this article, we discuss some of the aspects you should think about before you can decide which one fits your needs. At the end of this post, we provide some recommendations for specific acoustic guitar models.

First of all you should know that this post only considers acoustic guitars. But even if you want to play an electric guitar, an acoustic one could be the right choice at the beginning of your “career” for several reasons.In general, acoustic guitars are a bit cheaper than electric guitars (at least those for beginners). Also you don’t need any expensive equipment such as an amplifier or cable, which saves you money too. But beside the price there are much more important arguments we think of when we recommend to start with an acoustic guitar:

You can play wherever and whenever you want. An acoustic guitar is quickly available and easy portable. Imagine you are on a camping/caravaning trip with an electric guitar … it would not even be playable without electricity. And now imagine the same trip with an acoustic guitar… there could be you and your friends, sitting at the campfire with your guitar and singing your favourite songs in a romantic atmosphere. Sure, this is only one case, but the straightforward usage of an acoustic guitar will increase the number of spontaneous guitar sessions at home too. I noticed, that an acoustic guitar standing around will leave its position immediately as soon as you have guests at home. Even people who never touched a guitar before will grab your guitar and are interested in playing an accord. In contrast, an electric guitar has to be plugged in and the amplifier has to be turned on. It is a small thing, but we have two electrical guitars and two acoustic guitars at home and that is my experience with it. The acoustic ones are played much more frequently.

In my opinion, the techniques are much easier to learn on a classical guitar at the beginning. Finally, all learned skills are completely transferable from the classical guitar to an electrical guitar when you want to switch later on.

Now that we are sure to buy an acoustic guitar, we have to choose the right one. First of all we have to differentiate between nylon string guitars (classical/spanish guitars) and those ones with steel strings (country/western guitars).

Country or Western guitars are often played with a plectrum but can be picked as well. Classical guitars in contrast are picked primarily.

The harder and louder sound of Steel strings may fit better at the fireplace mentioned above but for playing classical pieces, the acoustic guitar seems more suitable. Finally this choice is dependent on the music genres you want to play. But for flexibility we still recommend the classical guitar which can be played at the fireplace as well ;o)

When buying a guitar it is important to know that the price matters. The differences between the cheaper guitars and the expensive ones are often enormous. We recommend to visit an instrument/guitar store and try out some models of the different price categories to get a feeling of the differences. If you can not play the guitar yet, this is no problem. Just ask the salesman who is usually a guitarist too and I am sure she/he will play a few strokes on different guitars for you.

my old and my newer guitar

The question is how much you should spend on your first guitar. I think there are two different answers depending on your situation:

2: You just want to give the guitar a try but you do not know if it is the right instrument. Maybe you have been at a guitar concert and liked it or maybe you just visited our website and want to play some of our songs. Maybe you are just not sure if the guitar is the right thing. In general, it would be still the better choice to buy an expensive guitar, because a better sound will motivate you much more. But i also experienced people who were interested in playing guitar at first, but did not continue practicing it after a few months or a year. In this case it would be a waste of money (except you can sell the guitar afterwards). We recommend to buy a guitar in the lower price segment at the beginning and to change to a better one later on.

For example, Fabian got his guitar after we played and practiced together for about two weeks intensively. I could see that he was talented and interested in it as well and therefore it was the right thing to buy not the cheapest but a better guitar from the start.

When i started to play the guitar, i already tried the piano before (which turned out to be not my favourite instrument) and got some guitar lessons on a borrowed guitar as well. After two weeks on trying out electric guitars as well, it was clear that i wanted to learn the classical guitar intensively. Together with my teacher i chose a very good middle price segment guitar which is still in use sometimes beside my newer one.

A guitar for beginners in the lower price segment, but with a very good sound/price ratio is the Yamaha C40. It is often recommended by experts for absolute beginners in different forums and discussions. Fabian and I recommend the Yamaha CG-122 MS as a beginner guitar in the middle price segment. This is Fabians first guitar and we both like her tone characteristics and sound. In all our current recordings, you can hear this guitar too. 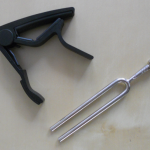 The tuning of a guitar is not easy at the beginning. The best thing to do would be to practise this with somebody who already plays guitar. In case that you do not know anybody who already plays the guitar or you just want to try it out yourself, we will publish an according tutorial soon. For convenience, we advise you to buy a digital tuner. You can simply clip it on your guitars head and it will then show you if the played string is too high or too low. I used this tuner for a while during some performances on stage and it is also suitable for louder environments. I personally still prefer using a tuning fork but this may be a habit or in favor of tradition.

Another important thing is the case of your guitar. For better protection, there are hard cases. But when your don’t have a car and travel a lot by train or bike, you should consider buying a soft bag model. The softer bags often mean a bit less protection for the guitar, but they are light weight and often cheaper than the hard cases. 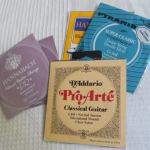 When you buy a new guitar, it is common that there are already strings included. But it is never wrong to have a second set of strings at home, just in case a string tears. I just visited some music stores to get a second and a third opinion on this topic and they all recommended D’Addario Strings for beginners who want to get the best or at least a good sound out of their guitar. I will write another tutorial about choosing the right strings soon.

The best way to buy a guitar is to visit at least one regional and specialized dealer or music instrument store to get an idea what the different guitar models and price categories are about. It is not bad to talk to different guitar sellers for a second or a third opinion. With our mentioned guitar models in this post, we provide you information about guitars we both tested and like a lot. But there is no guarantee that you will like it too.

We will update this article with additional information and other guitar models now and then. For any questions, feel free to leave a comment below.

Continue reading this series: How to hold the guitar >>

Browse the other parts of this article series:
Beginners Workshop